Paragon have worked on numerous NPI projects and we work with customers to carry them through to higher volume production. Certain parts we can manage to retain if we can lower the cost and become competitive in pricing and hit delivery schedules.

A particular sub Assembly that we manufacture consists of 3 manufactured parts that we produce complete, assemble and deliver the full sub Assembly to our customer. One part in particular we had to send out to gear cutters to produce a spline and also had heat treatment process. The processors who we used to cut the splines would constantly let us down and the lead-time could be anything up to a 60 day turnaround.

In order to keep the job long term we had to reduce the cost significantly and be able to keep control of the lead-time. Paragon purchased a Gear Hobbing so we could cut the splines in house to enable us to control lead-time, Paragon then increased the batch sizes to reduce the heat treatment costs significantly. After looking at tooling and manufacturing methods Paragon also managed to reduce running times.

Paragon were then able to reduce the overall cost of the finished sub assembly part by 60% per part, this in turn enabled us to sign up to a long term agreement and we are now in full production. 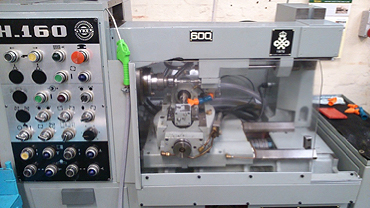 The Hobbing machine where Paragon invested significant capital upfront to reduce the lead-time. 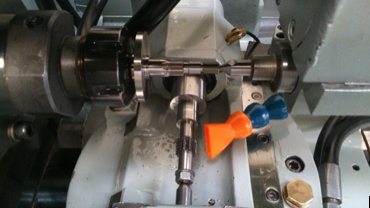 Where we can see future demand and commitments we are willing to out lay spend up front to enable us to reduce costs long term.

Paragon work with a number of customers manufacturing Sub-contract off load work for a variety of machining processes. Paragon were manufacturing some first operation turning components prior to Heat Treatment for a large Aerospace company.

Demand fluctuated quite a lot and parts would come in on 20 day lead-times. Paragon started to struggle when the work dropped off, as the free capacity was filled with other customers work. By the time the machines were cleared and set up on other customers work, Paragon would deliver some on time, but quite a lot were slipping, due to the varying influx of sub contract turning.

From the graph below you can see that from January 2013 to January 2015 Paragons OTIF was significantly inconsistent. In January 2015 Paragon made the decision to create a Cell specifically for this customer. Paragon has now got dedicated machines for all of this customers work and the trend is heading in the right direction. With the exception of January 2016 where Paragon had issues with finished components being held up at the FAI stage, Paragon have consistently been hitting 100% OTIF.